A Release Agreement allows one party to release another from its past, present or even future obligations and liabilities. While an indemnification provides that one party will effectively shield another from future claims.

Release & Indemnity forms which cover a variety of situations. These forms include standard indemnifications and releases for accidents, security interest and product liability. 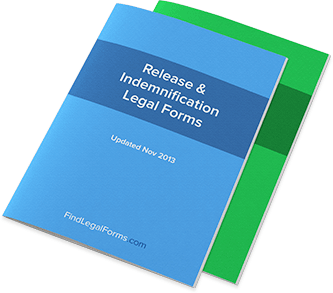 The term “release” focuses on a wide spectrum of legally-binding contracts that deal with the willing yielding of specific rights and liabilities. A person might be asked to sign a “release” when beginning a certain risky training program, for example, that clears the training program of any liability should complications arise. In many cases, a release is simply a way of acknowledging that you’re attempting something “at your own risk,” and that you are putting your intent not to take any potential legal action down in writing.

Additionally, “releases” may refer simply to the yielding of any legal claims that exist in the past, present, or future, and not simply refer to any singular event.

When are releases used?

Releases can be used for a multitude of events and situations. A “General” or “Liability” release – perhaps the most common form of release - is employed whenever you want to avoid liability as a result of usage of property. Waivers work in a similar way. Other types of releases, such as promissory note releases, will release two parties from the conditions of a contract that was signed earlier.

What are some examples of releases used most frequently?

There are a wide number of releases used in different industries, businesses, and in daily life. Here are some of the most frequent releases you’ll come across:

This is not meant as a complete list of releases, but as a list of examples of frequently-used release forms.

What’s the difference between a waiver and a release form?

A waiver is a type of release form, but a release form is not always referred to as a waiver. Instead, a waiver deals with the assumption of risk by one party. It is still a release form in that the person is still releasing their future claims against an individual or organization, but is unique from other release forms in that it deals exclusively with risk that has not yet been taken on.

If an accident occurs after a waiver has been signed, the difference between a waiver and an Accident Claims Release is that the waiver was signed before the accident took place; accident releases instead focus on claims that already exist.

What about releasing confidential information?

Because signing a release yields away rights and privileges such as access to confidential information, it’s important that you fully understand what you’re signing before you sign a release. This is also true for waivers and any other contract that deals with your release of future rights, such as intellectual property rights.

When are releases enforceable?

Provided that a release is valid (see below), it is enforceable upon both the signing of the contract itself as well as the satisfaction of the provisions it contains. For some releases, however, it will simply be a matter of enforcing a contract that is valid once signed. Waivers, for example, deal with the assumption of future risk and are therefore considered enforceable from the moment they’re signed unless the contract itself stipulates otherwise.

What are the requirements for releases to be valid?

Like many other contracts, issues like the age and mental capacity of the signee are important in determining whether or not the release signature is valid. But an issue particularly important to many releases is the issue of consideration.

In most contracts, “consideration” stipulates that in order for a contract to be valid, it should provide something of benefit to both parties involved. When it comes to General Release forms – often used in settlements, for example – this is particularly relevant. According to the law, someone should not sign away their claims, past and future, against an individual or entity without receiving some kind of compensation or benefit in return. For many other types of releases, consideration is an issue that will play a key role in determining whether or not the contract is valid.

When is a release effective?

Most releases stipulate that they are effective immediately upon signing, even though many releases apply to future events. For example, signing a waiver before attempting a high-risk stunt will not mean the waiver is not in effect until the stunt itself takes place. It’s important to review each release in order to understand the provisions relating to the effectiveness date of the individual release. If no such date is given, it is best to assume the release is effective upon signing.